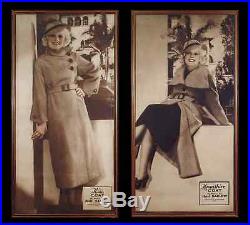 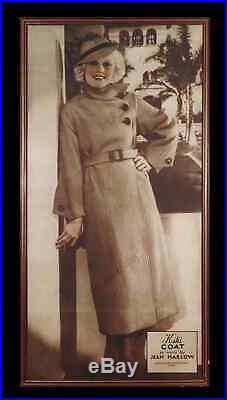 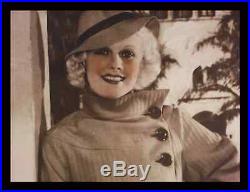 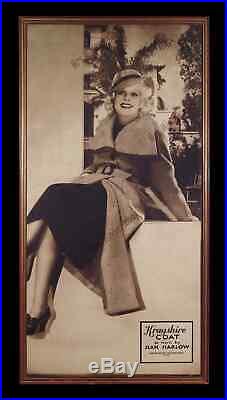 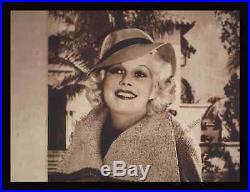 TOP GOLDEN AGE HOLLYWOOD! Up for sale here are. TWO (2) ORIGINAL 1930’s 1-of-a-kind Jean Harlow Life-Sized Movie Poster Store Display Portraits! Made to advertise high-end coat couture back in Hollywood when Harlow was still alive and working for MGM during the 1930’s. Harlow died unexpectedly in 1937, and so these have to predate that famous tragedy. She was only 26 years old when she passed away, and, at the peak of her movie career. She was also one of the top people in the industry of “glamour, ” which was ruled supreme by the lineup of female stars at Metro-Goldwyn Mayer! I’m sure that’s why they paid her to advertise these coats. The two life-sized (30 by 60 inch) portraits of the young and vibrant superstar depict the hight of Depression Era glamour and the “Hollywood” sensibility. You can even see the classic Hollywood imagery in the background with the palm trees and the distinctive California. No question that these are from Tinseltown. As as an extraneous side-note point of interest – Palm trees are NOT indigenous to California, despite the fact they are so synonymous with the “Golden” state, especially in the many images you’ll see promoting Hollywood and/or the city of Beverly Hills! I acquired this pair of displays about three decades ago from one of the top Golden Age collectors. I do not believe these were originally framed in the 1930’s, as witnessed by the small approx. 1/2 inch brown border that surrounds both displays. It’s hard to see the brown border in the photos because of the frame, but they’re there. These were framed to display them in a home. Both displays are in fantastic shape. Both were made using tremendously LARGE photographic blowups, which makes these especially rare as an artifact, as it’s virtually IMPOSSIBLE to find original 1930’s photographic portraits as BIG as these – on any star, never mind such a great legend. It’s unlikely there were many of these made, if there were even any more than these two produced in the first place! I have a hunch these were the only two created. Otherwise, these would likely have been lithographed if a measurable quantity was needed. That’s because the photographic process was MUCH more expecive than lithography, especially in this giant size. In display A, Harlow sports a Kragshire coat, and on the B display – a Kiki coat. Obviously, these would serve well as a centerpiece addition to any advanced collection or otherwise. Below is the amazing filmography of Jean Harlow. 1929 – Double Whoopee… As Swanky blonde in her first standout role with Laurel & Hardy in their classic short. 1930 – Hell’s Angels… As Helen directed by Howard Hughes. As “Extra” in restaurant scene in the Charlie Chaplin masterpiece. 1931 – The Secret Six… 1931 – The Public Enemy… As Gwen Allen with James Cagney. 1931 – Platinum Blonde… As Anne Schuyler directed by Frank Capra. 1932 – Three Wise Girls… As Cassie Barnes in her fist starring lead role. 1932 – The Beast of the City… As Daisy Stevens, aka Mildred Beaumont in this early Film Noir classic. As Blonde at Paradise Club in this early Howard Hawks controversial gangster film. 1932 – Red-Headed Woman… As Lillian “Lil” / “Red” Andrews Legendre. 1932 – Red Dust… As Vantine starring with Clark Gable. 1933 – Hold Your Man… As Ruby Adams with Clark Gable. 1933 – Dinner at Eight… As Kitty Packard directed by George Cukor. As Lola Burns directed by Victor Fleming. 1934 – The Girl from Missouri… As Mona Leslie with William Powell directed by Victor Fleming – David O. 1935 – China Seas… As Dolly “China Doll” Portland in another vehicle with Clark Gable. As Hattie with Spencer Tracy. 1936 – Wife vs. As Helen “Whitey” Wilson with Clark Gable directed by Clarence Brown. As Suzy with Cary Grant. 1936 – Libeled Lady… As Gladys Benton with MGM legends William Powell, Myrna Loy, and Spencer Tracy. 1937 – Personal Property… As Carol Clayton with Clark Gable in her final film. It can crash regardless of any decision you make and can even crash regardless of any decision made by the company related to the stock – Leaving you with a near worthless piece of paper that won’t inspire anyone! The magnificence of art and historic documents have an inherent value that relates to civilization and society. These vintage store displays are definitely ECONOMY PROOF! FOR MOST ITEMS LISTED. If you’re in the market for top quality original vintage movie posters or Star Wars, then please. The item “JEAN HARLOW 1930’s MGM LIFE-SIZED VINTAGE PHOTOS MOVIE POSTER STORE DISPLAYS” is in sale since Thursday, May 16, 2019. This item is in the category “Entertainment Memorabilia\Movie Memorabilia\Posters\Originals-United States\Pre-1940″. The seller is “mrs.miniver” and is located in Pompton Plains, New Jersey. This item can be shipped worldwide.