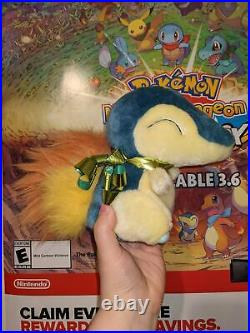 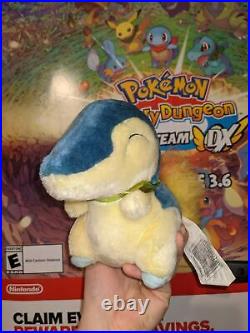 This is a very special Cyndaquil plush coming straight from my collection and nearly impossible to find. Hasbro released Fuzzy medium-sized plushies as one of their series from Kanto through Hoenn generations. These were usually secured to boxes for display. EDIT: After extensive research and discussion with some experience prototype collectors and contacts who work for Hasbro, based on the tush tag code number, this item is not JUST a prototype. There are multiple stages a toy must go through before it is manufactured and put out for official sale. When deciding on new plushes a company will first suggest an idea for a new series and discuss possible characters for the release as well as defining features of the stuffies. > After that artists draw up sketch ideas or design a plush pattern. If approved it will then be designed into an official prototype, which often is designed in a patchwork or alternative color design to differentiate it from a final product. This is then used in company meetings and then either it is denied or approved. Sometimes multiple prototypes are approved for the purpose of presentation at Toy conventions that major businesses use to show possible upcoming toy lines. > Once fully approved and any testing/surveying is done to predict popularity or approval from consumers, display only pieces are at times designed before major mass production is approved to show upcoming releases in storefronts. > After that as long as all foes according to plan, mass production begins and then the stores officially receive the product to sell. Based on professional guesses from a Hasbro employee and some prototype collectors, there were Johto Fuzzy Hasbro dolls that were being prepped to release specifically in the UK only. I also own a Quagsire with the same tag that is nearly as rare. There are two big theories. 1 Most likely situation: UK/Europe was known to be screwed over by Hasbro on multiple occasions with toy releases that were supposed to happen that Hasbro decided against last minute… Possibly due to concerns of the population size vs USA resulting in not enough demand for the release to be worth the profit. Theory: This Cyndaquil is a store display version rather than a prototype. And for whatever reason Hasbro decided last minute to cut manufacturing and not fully release this product. Given how incredibly rare it is to see this Cyndaquil (one was recently auctioned on a hardcore collector community and I’ve seen only 2-3 others displayed by other hardcore collectors on their collection sites).. It is most likely that it was limited produced for storefront display at select occasions. There was also a Special Snaptoy Series from Hasbro during Hoenn that was supposed to release many characters including Blastoise, Charizard, Venusaur, Vigoroth, Metagross, Beautifly, Corphish, Grovyle, Blaziken… And I have seen pictures of both multi color patchwork prototypes and regular color productions for many of these including Blastoise, Venusaur, Charizard, and Vigoroth. In the end only Blaziken Grovyle and Corphish were released out of this list. The Hasbro employee also ran the number on the Regular color Charizard I own from this series.. And it is most likely a similar situation to the Cyndaquil above. Was going to be released and was on store front but never made it to mass production. I personally bought my Charizard from a man who was close with an old Hasbro employee who had two from when working there. For authentication purposes, this item has the official Hasbro plush tag and product number seen on similarly released items and the three loops on the bottom of the plush used for securing to display boxes. This item has never been seen with a box which further supports the theory this is a storefront display that never got fully released. Theory 2: It was simply very limited produced and by some unlucky chance most people who bought one used it until it was thrown away or many are just hidden away in European peoples attics, etc. I and others agree this is less likely… Although it has happened with other products simply because they were super popular and limited. If you are from UK/Europe and saw my Cyndaquil or Snaptoy products on shelves please let me know as I’d love to put more evidence behind these historical pieces. Condition (New, Exc, VG, Good, Fair, Poor). Rarity (Common, Uncommon, Rare, Ultra Rare). Hasbro – Fuzzy Plush (Prototype). Join for first dibs on incoming merchandise and lightening fast customer service. Looking for more pictures or for another item entirely? The item “Cyndaquil Fuzzy Hasbro Store Display Plush Ultra Rare Vintage Pokemon Prototype” is in sale since Sunday, March 14, 2021. This item is in the category “Collectibles\Animation Art & Merchandise\Animation Merchandise\Other Animation Merchandise”. The seller is “pokelectronics” and is located in Wilmington, Delaware. This item can be shipped worldwide.